Among the many roles it will fulfill are, loitering over hostile areas facing enemy fire, speeding through mountainous terrain and launching air-to-ground missiles from miles away. Additionally, the FARA (Future Attack Reconnaissance Aircraft) is expected to be able to descend upon active combat “hot zones” and control attack drones from safer standoff ranges.

However, alongside these clearly known missions, what about the need to have sleek, elusive transport, recon and attack helicopters quietly operate near or even within enemy territory? Can helicopters be stealthy? Of course, there are a lot of details and nuances to this topic which, for understandable security reasons, are not likely to be available.

Yet at the same time, a cursory look at Bell and Lockheed-Sikorsky’s FARA offerings do seem to invite some interesting questions about radar signature management.

“We know how to hide in the radar clutter and we understand how that generates standoff and overmatch,” Brig. Gen. Walter Rugen, director of the Future Vertical Lift Cross-Functional Team, told The National Interest in an interview. 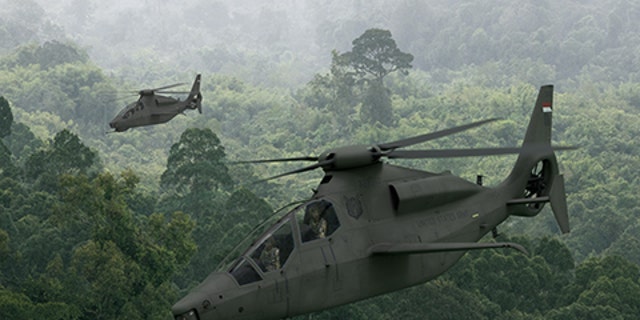 Of course, Rugen did not elaborate upon specifics regarding any deliberate effort to engineer “stealth” per se, he did explain the importance of operating a wide range of missions in the most high-threat areas.

“The lower tier of the air domain is an interesting place to be with our high-fidelity models. Academics and industry have been putting billions of dollars into space modeling. We are very much able to characterize the electromagnetic domain,” Rugen said.

Bell’s Invictus, for instance, appears to have a somewhat “buried” weapons delivery station, as opposed to legacy helicopters that hang easily detectable pylons well outside of a helicopter body.

The Invictus seems to have an ability to bring weapons in-between smoothly configured areas of the body. Perhaps most notably, the body of the Invictus itself is smooth and blended, revealing decidedly stealthy contours.

The absence of hard edges, protruding structures or sharply angular structures of course minimize the fidelity of any kind of radar return signal; electromagnetic “pings” need to generate varied return signals to offer renderings of an aircraft’s size, shape, speed and angle of approach.

Multiple pings from different sharp or detectable shapes give radar commanders a much clearer picture of the “dimensions” to a given aircraft. The Invictus also has very thin wing-like structures and, interestingly, central rotor blade structures melded directly into the aircraft.

Essentially, there is no easily detectable “pole” or protruding vertical structure leading from the body up to the rotor blades. Also, as opposed to an angled or “finned” back end with vertical and horizontal shapes going in opposite directions, the Invictus has a rounded thrusting or vectoring structure on the back end.

The Lockheed-Sikorsky Raider X also appears very stealthy in a number of key respects. The entire body is rounded in somewhat of a spherical configuration. Its nose is much less pointed than that of the Invictus and available photos show what appears to be an internal weapons bay that opens up to fire missiles.

Internally lodged weapons of course are a key element of stealth technology to be sure, and yet photos do show that the helicopter can open up, extend and launch weapons. Interestingly, this is the kind of stealthy characteristic engineered for many stealthy Air Force platforms such as the F-35.

The Raider X does have two counter-rotating coaxial rotor blades that generate energy and heat in different directions, potentially offering some kind of radar signature.

However, advanced helicopter technology, such as that now engineered into the Army’s existing Black Hawk “M” model make use of new vibration control technologies.

The Raider X has for quite some time been known to incorporate vibration management systems as a way to sustain unprecedented speeds without generating turbulence. Counter-rotating blades can also offset one another in a specific way as well, lessening otherwise disruptive vibrations.

Kris Osborn is the Managing Editor of Warrior Maven and the Defense Editor of The National Interest.

Why You Should Speed Up Your Digital Transformation During the Crisis