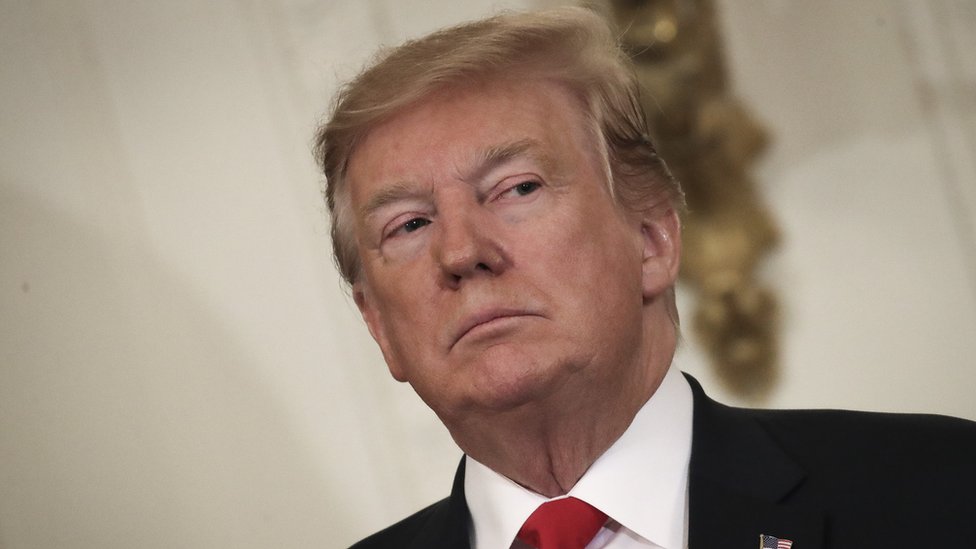 Stock markets in China and Europe have been hit after US President Donald Trump threatened new tariffs on China, putting a trade deal in doubt.

He said on Twitter the US would more than double tariffs on $200bn (£152bn) of Chinese goods on Friday and would introduce fresh tariffs.

Recent comments had suggested both sides were nearing a trade deal.

A Chinese delegation is preparing to travel to Washington for negotiations aimed at ending the trade war.

It is not clear whether Beijing’s top trade negotiator Vice-Premier Liu He will be part of those negotiations that are due to resume on Wednesday.

“We are currently working on understanding the situation,” foreign ministry spokesman Geng Shuang said during a regular news briefing.

Earlier, US media reported that Beijing was considering cancelling the talks. Reports said the Chinese were due to send a 100-person delegation to the negotiations.

European stock markets fell in early trading, with the main Paris and Frankfurt indexes down more than 2% by mid-morning. Particularly hard hit were the makers of cars, car parts and steel.

US stock futures pointed to a lower open on Wall Street. Markets in London are closed for a bank holiday.

Michael Hirson, Asia director at Eurasia Group, said: “His [Mr Trump’s] move injects major uncertainty into negotiations, which now face a rising risk of an extended impasse – perhaps even through the US presidential election.”

What did Mr Trump say?

The US president tweeted that tariffs of 10% on certain goods would rise to 25% on Friday, and $325bn of untaxed goods could face 25% duties “shortly”.

“The Trade Deal with China continues, but too slowly, as they attempt to renegotiate. No!” he tweeted.

After imposing duties on billions of dollars worth of one another’s goods last year, the US and China have been negotiating and in recent weeks, appeared to be close to striking a trade deal.

For 10 months, China has been paying Tariffs to the USA of 25% on 50 Billion Dollars of High Tech, and 10% on 200 Billion Dollars of other goods. These payments are partially responsible for our great economic results. The 10% will go up to 25% on Friday. 325 Billions Dollars….

“The president is, I think, issuing a warning here, that, you know, we bent over backwards earlier, we suspended the 25% tariff to 10 and then we’ve left it there.

“That may not be forever if the talks don’t work out,” he said.

Is the deal over?

So far, the US has imposed tariffs on $250bn of Chinese goods, having accused the country of unfair trade practices.

Beijing hit back with duties on $110bn of US goods, blaming the US for starting “the largest trade war in economic history”.

According to reports, in recent days US officials have become frustrated by China seeking to row back on earlier commitments made over a deal.

Sticking points have included how to enforce a deal, whether and how fast to roll back tariffs already imposed and issues around intellectual property protection.

“More likely, in our view, is that this renewed threat is an attempt to extract a few more minor concessions in the final days of talks.”

What will the tariff rise affect?

Mr Trump’s latest move will raise duties on more than 5,000 products made by Chinese producers, ranging from chemicals to textiles and consumer goods.

The US president originally imposed a 10% tariff on these goods in September that was due to rise in January, but postponed this as negotiations advanced.

However, both US and international firms have said they are being harmed by the trade war.

Fears about a further escalation caused a slump in world stock markets towards the end of last year.

The IMF has warned a full-blown trade war would weaken the global economy.

A Year Abroad Brought us F2F with the Power of Parenting