Shares of PayPal fell as much as 6% in after-hours trading after the payments giant missed Wall Street’s estimates for second-quarter revenue and lowered its full-year guidance.

PayPal’s revenue for the quarter rose to $4.31 billion, up 12% from a year earlier but still below Refinitiv consensus expectations of $4.33 billion. Adjusted earnings per share came in at 72 cents.

The San Jose, California-based company also slashed its full-year revenue guidance, which it attributed to delays in product integration, pricing initiatives that they said would be implemented later, and currency pressures. PayPal is now looking for full-year revenue of between $17.6 billion and $17.8 billion. The new range is well below Wall Street’s expected $17.92 billion. PayPal also projected lower revenue growth of between 14% to 15% — a percentage point below the previous range.

Total payment volume — a closely watched indication of how digital payments performed more broadly — was $172.36 billion for the quarter, mostly in line with forecasts of $171.49 billion, according to FactSet.

Payment volume for PayPal’s popular peer-to-peer payment app was also lighter than expected for the quarter, coming in at $24 billion compared with the $28 billion analysts had expected. Last quarter, PayPal announced that the app had 40 million users. Analysts have been watching closely for when Venmo will become profitable for its parent company.

“With another quarter of outstanding net new active growth, Venmo continues to offer a significant opportunity for merchants to attract a valuable, engaged, consumer base,” CEO Dan Schulman said on a call with analysts. “We continue to enrich the Venmo experience by making it more engaging and personalized.”

Shares of the payment company are still up 44% for the year, more than double the S&P 500’s performance. 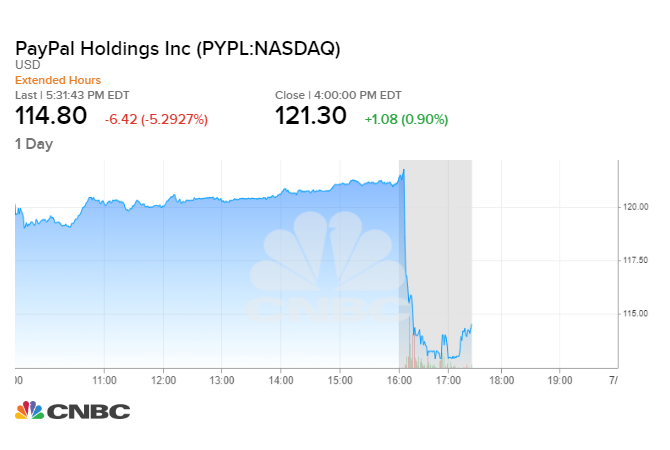 O2 to launch 5G network in UK in October