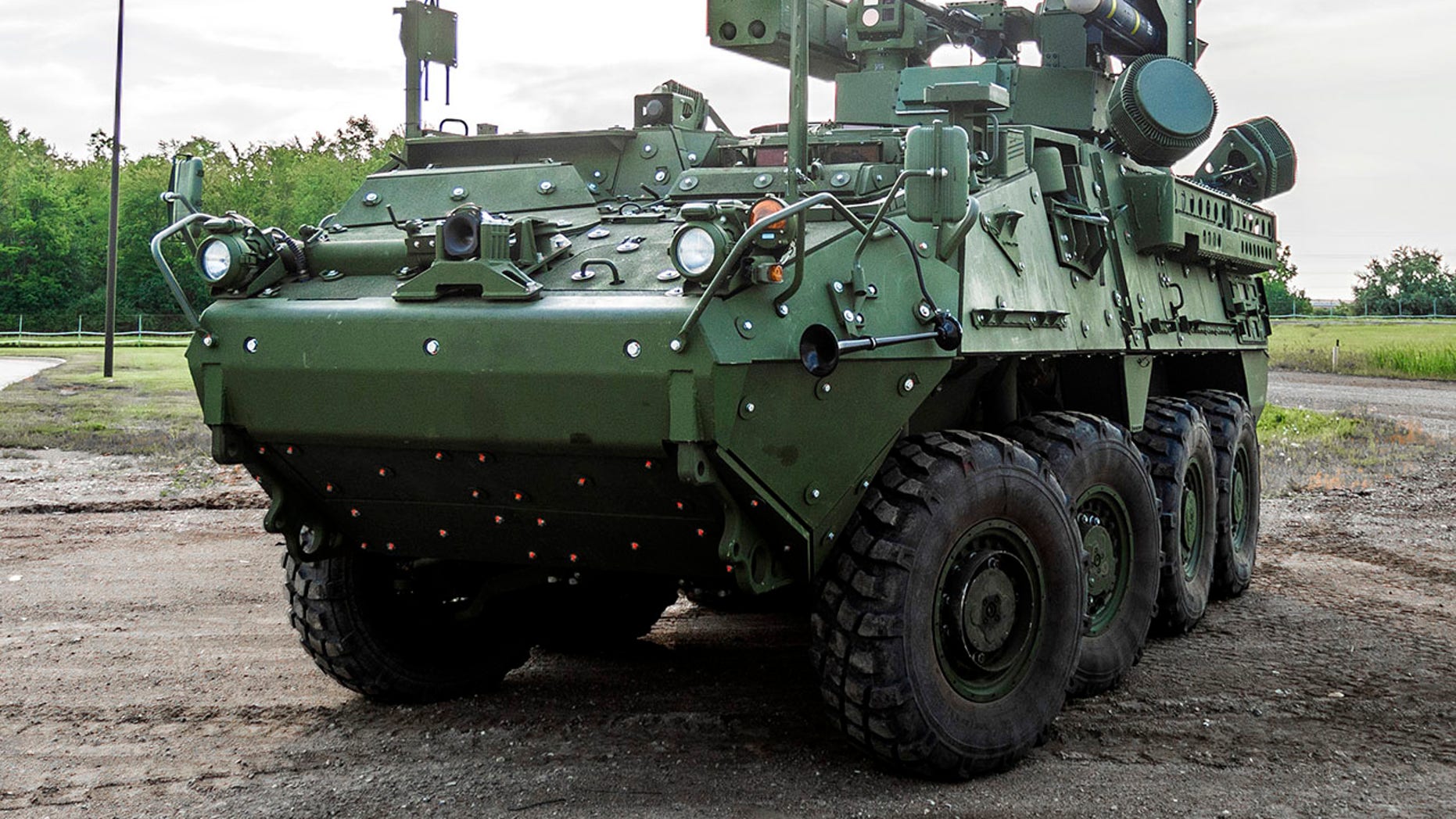 The Army has received its first Hellfire and Stinger Missile-armed Stryker vehicle to bring a new era of air and missile defense to fast-moving attack units by killing enemy drones, helicopters and incoming missiles.

The vehicles, in development for quite some time through an Army deal with General Dynamics Land Systems, are intended to bring back a Cold-War era emphasis upon air and missile defenses – with a uniquely modern and high-tech attack possibility. GDLS is now delivering the first handful of nine prototype vehicles it is on contract to provide the Army.

“Working with the Army, we selected the armaments due to the lack of an ability to defeat rotary wing and UAVs. The interceptors were selected upon the threat we anticipate,” Kendall Linson, Manager of Business Development, General Dynamics Land Systems.

“It is not a traditional turret. It is a rotating weapons station that is remotely operated inside the vehicle,” Linson said.

Air-defense weapons on the Stryker address a previously absent “counter-air” combat potential for Stryker vehicles, which, when armed with SHORAD weapons, have an ability to sense and destroy enemy drones, helicopters, low-flying aircraft and even some approaching missiles. Senior Army weapons developers explain it this way; during the Cold War when the US faced a Soviet threat, ground-launched air-defense was naturally a huge priority, something which “atrophied” during 15 years of counterinsurgency.

Compared to an existing M2 .50-cal machine gun mounted on Strykers, the new 30mm weapon is designed to improve both range and lethality for the vehicle. The new gun can fire at least twice as far as a .50-cal, General Dynamics Land Systems developers told Warrior.

The Stryker’s fire control system, which includes a Remote Weapons Station, targeting screen and manual controls, received the radar-camera fused information before tracking and “locking on” to the target.

The target tracking, lock-on and fire functions are managed by a control stick and soft switches on the screen, allowing the gunner to slew the weapon onto the target.

As a result, ground infantry supported by armored vehicles will have more mobile air-defenses to address closer-in air threats. This is where the Stryker SHORAD comes in; infantry does not have the same fires or ground mobility as an armored Stryker, and handheld anti-aircraft weapons such as a Stinger would not have the same defensive or attack impact as a Hellfire or Stinger-armed Stryker. In a large mechanized engagement, advancing infantry needs fortified armored support able to cross bridges and maneuver alongside foot soldiers.

Chinese or Russian helicopters and drones, for instance, are armed with rockets, missiles and small arms fire. A concept with SHORAD would be to engage and hit these kinds of threats prior to or alongside any enemy attack. SHORAD brings an armored, mobile air-defense in real-time, in a way that most larger, less-mobile ground missiles cannot.

The PATRIOT missile, for instance, is better suited to hit incoming mid-range ballistic missiles and other attacking threats. While mobile, a PATRIOT might have less of an ability to support infantry by attacking fast-moving enemy helicopters and drones.

An emphasis upon “deployability,” “mobility” and “expeditionary” warfare maneuvers are indispensable to the Army’s Stryker deployment strategy. Along these lines, a recent essay from The Modern War Institute at West Point raises the point that Russia has an extensive and very evolved railway system – which enables much faster and larger deployment potential. Stryker Brigades able to move long distances at 60-mph can offer a countermeasure or equivalent to rapid Russian mobilization. Demonstrating this mobility was a primary focus of the Army’s Dragoon Ride several years ago wherein Army Stryker units conducted extensive convoy movements across Eastern Europe while conducting interoperability exercises with NATO allies.

The Russian threat in Europe clearly seems to inspire the Army’s rapid SHORAD development, as the service seeks to increase mobility and forward deploy multi-function armored vehicles to the region; a more “lethal” Stryker, enabled by newly emerging air-defense weapons, represents a key element of this initiative.

“In a 2016 survey of Russian elites, 82.3 percent responded that the national interests of Russia ‘for the most part extend beyond its existing territory,’ up from 43.3 percent in 2012 and 64 percent in 2008,” the Study states.

The RAND report, written by Raphael Cohen and Andrew Radin, also cites what could be called a Russian “paranoia” or fear of NATO threats near its borders.

“Russia has felt perennially vulnerable and has often displayed a kind of defensive aggressiveness….smaller countries on Russia’s borders are viewed less as potential friends than as potential beachheads for enemies,” the report writes, citing Princeton professor Stephen Kotkin as the source.

A Doctor's Guide to Building a Business in the Digital World