Wall Street on Monday should expect to see China’s retaliation to higher tariffs from the United States.

But the Chinese have done a great deal to limit foreign competition in the country, and that could prove problematic for them in the trade war, CNBC’s Jim Cramer said Friday.

“In short, despite what you may have heard from myriad talking heads … the Chinese government’s got a weak hand,” the “Mad Money” host said. “They just don’t have the cards to hurt our economy as much as we can hurt theirs. By the way, that’s been the whole premise of Trump’s trade war: China has more to lose than we do.”

Apple, Boeing and Caterpillar are three names that have been harmed by the prolonged trade war. Still, Boeing has a large backlog, China only makes up 5% of Caterpillar sales, and there’s no way the People’s Republic can put Apple out of business, Cramer said.

“So I believe the sell-off we’ve been dealing with could now peter out. Listen, we’ve gotten the tariff increase and we have the Uber IPO over with. That’s certainly the sense I got from the end of today,” he said. “Remember, hell week — the week I’ve been the most worried about all year because of all this new supply — is officially over.” 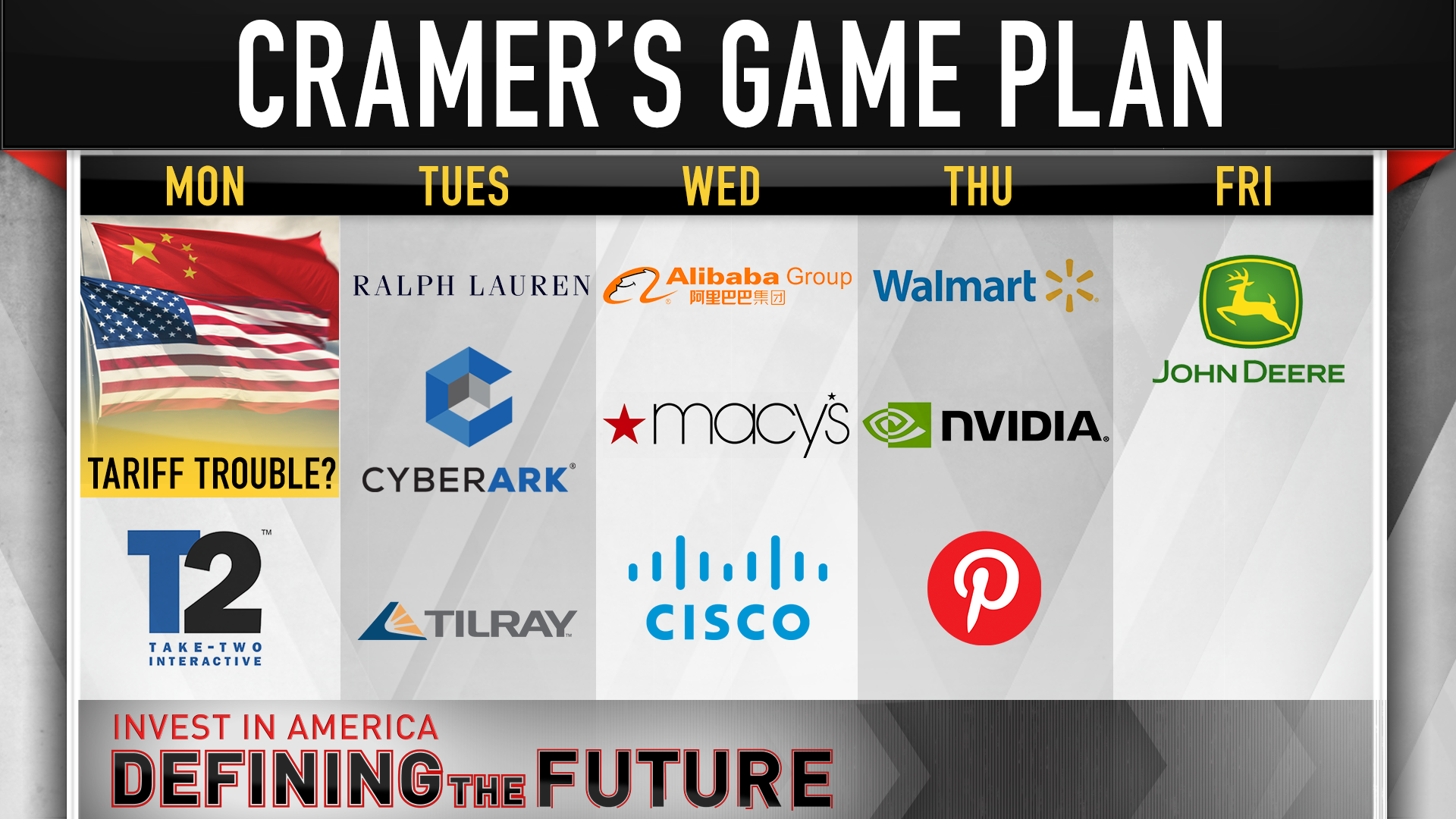 Hell week culminated with Uber‘s “total thud” of a debut and an increase of tariffs on products shipped from China, which was the last thing that markets wanted to see, Cramer said.

Many investors thought the ride-hailing company, in the most anticipated IPO of the year, would make a red-hot debut on the New York Stock Exchange, but the share price fluttered to about a $41 close after raising more than $8 billion on its $45 offering price.

In broader trading, U.S. equities rebounded after initially selling off when tariffs on Chinese imports were hiked to 25% from 10%. The Dow Jones Industrial Average climbed 114 points, the S&P 500 gained 0.37% and the Nasdaq Composite rose 0.8%.

“We made it through hell week,” the host said. “And now that we’ve made it to the other side, we can finally start talking about earnings and interest rates again, not just tariffs and the Uber deal. And I bet that means the market will attempt to stabilize at these new lower but oversold levels.”

The Trump administration a year ago began sending American businesses a clear-cut message to get out of China, Cramer said.

Despite another round of tariff increases Friday and a new episode in tense U.S.-China trade relations, many companies heard the message loud and clear.

“Nearly everyone in the business community saw this coming. They’ve talked about it endlessly, and they’ve made a lot of the necessary adjustments,” the host said. “You know who’s been caught off guard? The pundits, and that’s why the market could ultimately rally on what you would’ve expected … to be a really ugly day.”

Cramer suggested Friday that investors add three more 5G plays to their basket of stocks, given the current state of the market.

“In a confusing market, you should always be ready to fall back on your favorite long-term themes, and right now the 5G buildout is one of the best,” the host said. “And VMWare, Silicon Labs and Marvell Tech are now three more great ways to play it.”

At the end of April, Cramer listed Qualcomm, Skyworks Solutions, Broadcom, and Xilinx among the best chipmakers to benefit from the rollout of the fifth generation of wireless technology. He also recommends Nokia and Ericsson as a play on telecommunications infrastructure. On the networking equipment front, Cisco Systems has exposure to the space, Cramer said.

A slew of other phone and technology companies will spend billions of dollars in coming years on the 5G buildout that is expected to offer faster download speeds and cellular connections that match that of Wi-Fi, he noted. Even after a week of extreme market volatility, stocks that have multi-year growth themes are names worth gobbling up, he added.

“We’re going back to the 5G well because, well, it’s just such a great story and there are just so many different ways to play it,” he said. “These are exactly the kinds of stocks that are worth buying into a market-wide moment of weakness, like we had today, and while the worst of the latest decline may be behind us, know that hell week’s over, there’s always gonna be another sell-off.”

LivePerson CEO Robert Locascio explained that, although artificial intelligence is changing the fabric of call centers, bots are enabling people to benefit monetarily from the new technologies.

He explained how the conversational commerce company’s Maven platform allows former call center workers, such as one woman in the Dominican Republic, to create a bot, own it, and deploy it themselves. She was able to sell millions of dollars worth of grills, Locascio said.

“She was empowered to basically create that bot, deploy it, and change her life,” he said. “She’s doubled her salary. And that’s the power of this thing.”

Earlier this week, Cramer had the chance to talk with Baltimore Ravens coach.

“You’ve gotta care about people,” he said. “When you think about it though, team first, right? If nobody cares who gets the credit, how can we accomplish. Maybe that’s kind of a lesson in our country we could take to heart, you know, and get some things accomplished.”

Catch the interview in full here

In Cramer’s lighting round, the “Mad Money” host zips through his reaction to callers’ stock picks of the day.

Domo Inc.: “Domo, we like that. The Utah-based enterprise software company. We think they’re terrific. Buy.”

Aurora Cannabis Inc.: “I’m trying to limit the number of cannabis stocks I recommend to Cronos and, most importantly, Canopy. I care about balance sheets. That’s what determines things for me.”