The outlook for Chinese stocks may be risky given the uncertain state of U.S.-China trade relations. But Lewis Kaufman, a portfolio manager at Artisan Partners, thinks investors should buy them anyway.

“Regardless of what ultimately happens with the China trade tensions, there is a robustness to China that doesn’t exist anywhere else in the emerging markets,” Kaufman told CNBC in a phone interview. “We want to be leveraged to that.”

“There’s an ecosystem for capital formation. It’s very difficult to access domestic demand through the vehicles we would wish to use in so many emerging-market countries,” Kaufman said. “But in China, if I want to buy into a health-care company, I have 10 choices. If I want to buy into an internet company, there are lots of choices.”

Kaufman’s fund, the Artisan Developing World (ARTYX), has benefited greatly from his bullishness on China. The five-star rated fund has outperformed 98% of its peers over the past three years, returning more than 15% annually to investors, Morningstar data shows. The fund has been on fire this year, returning a whopping 33%. It also ranks in the Global Emerging Markets Equity category’s top percentile in 2019 and has more than $2 billion in assets under management. 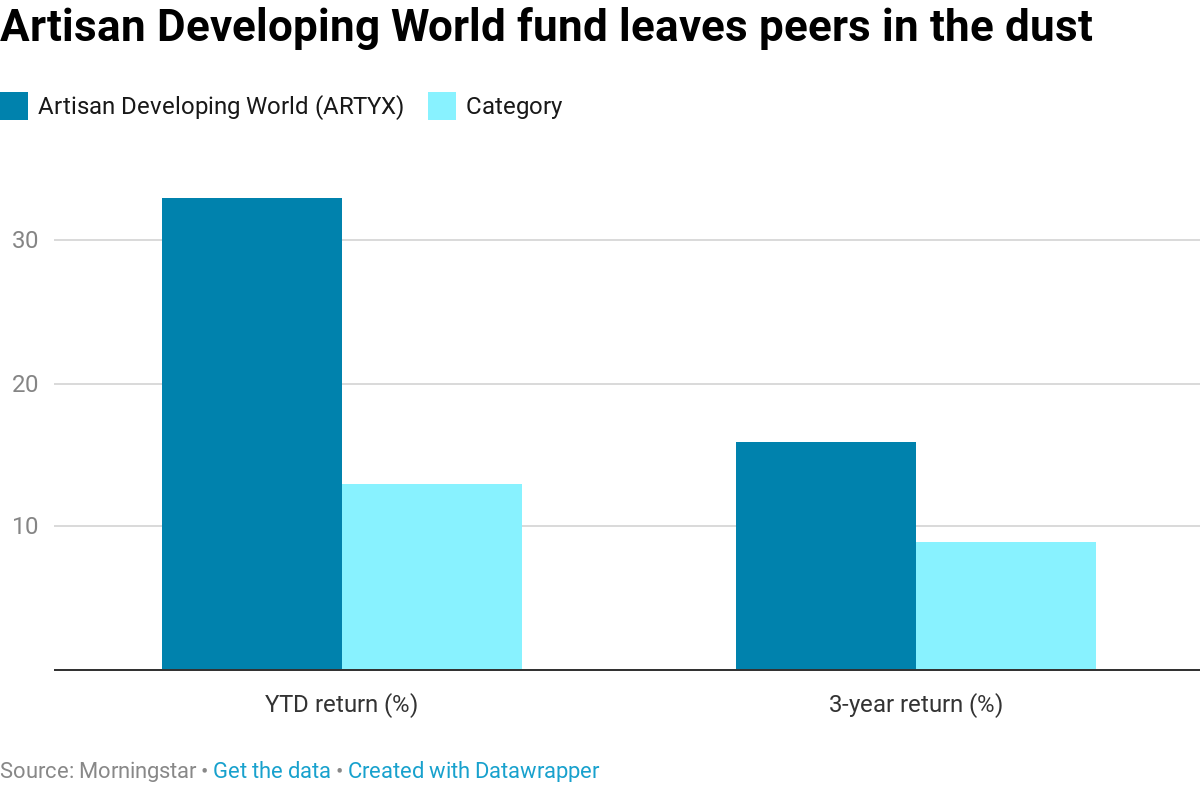 For more than a year, China and the U.S. have slapped tariffs on billions of dollars worth of each other’s goods. The exchange of tariffs has shaken investor confidence as it stokes fears of lower corporate earnings and slower economic growth.

The latest trade escalation between the world’s largest economies came in May after the Trump administration hiked tariffs on Chinese goods and threatened to impose additional levies. China then retaliated with higher tariffs on U.S. products of its own. Trade tensions dissipated slightly on June 29 after President Donald Trump and Chinese President Xi Jinping agreed to restart trade negotiations. The two leaders did not set a timetable for when talks would resume or how long the would take, however.

“In China, we’ve got the trade tensions. We’ll see how that evolves. There’s certainly a possibility we’re in a deeper, more drawn out trade tension. There’s also a possibility that gets resolved, although I think that probability is falling,” Kaufman said. “But my point is there is a robustness to the Chinese economy and equity story that really doesn’t exist anywhere else in the emerging markets.”

That robustness is seen in Kweichow Moutai, a Chinese spirits company that makes Baijiu, a popular liquor in China. Shanghai-listed Kweichow Moutai have been on fire this year, rallying around 70%. Meanwhile, Diageo — the world’s largest spirits company — is up about 25% year to date. The stock is also among Kaufman’s biggest holdings, comprising more than 4.5% of his fund’s holdings. 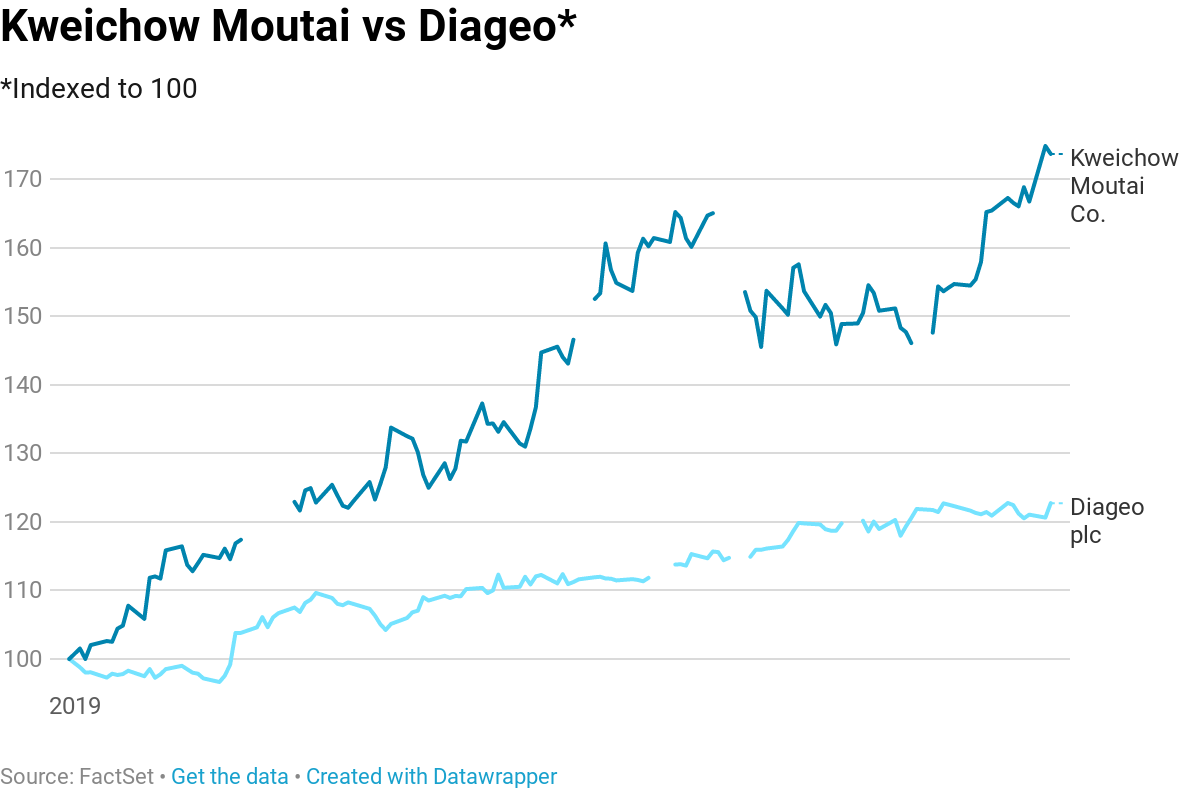 “It’s a $170 billion company and that speaks to the size and the scale of the Chinese consumer story,” Kaufman said about Kweichow Moutai. “You have 1.3 billion people there. On a per capita basis, it’s still an emerging country. But if you put that in aggregate against the 1.3 billion people, you have a very large market opportunity.”

Kaufman noted that Moutai’s biggest constraint right now is supply, since Baijiu needs to be aged five years before being brought to market. “Right now, there’s a lot of demand for high-end premium Baijiu, but only a finite supply. Volumes are growing at a steady pace. They can probably sell more if they had more supply.”

Another stock that benefits from China’s robust consumer story is TAL Education Group, an after-school education company. TAL is Kaufman’s biggest holding at nearly 5% of the overall portfolio. The company’s U.S.-listed shares are up more than 47% in 2019. 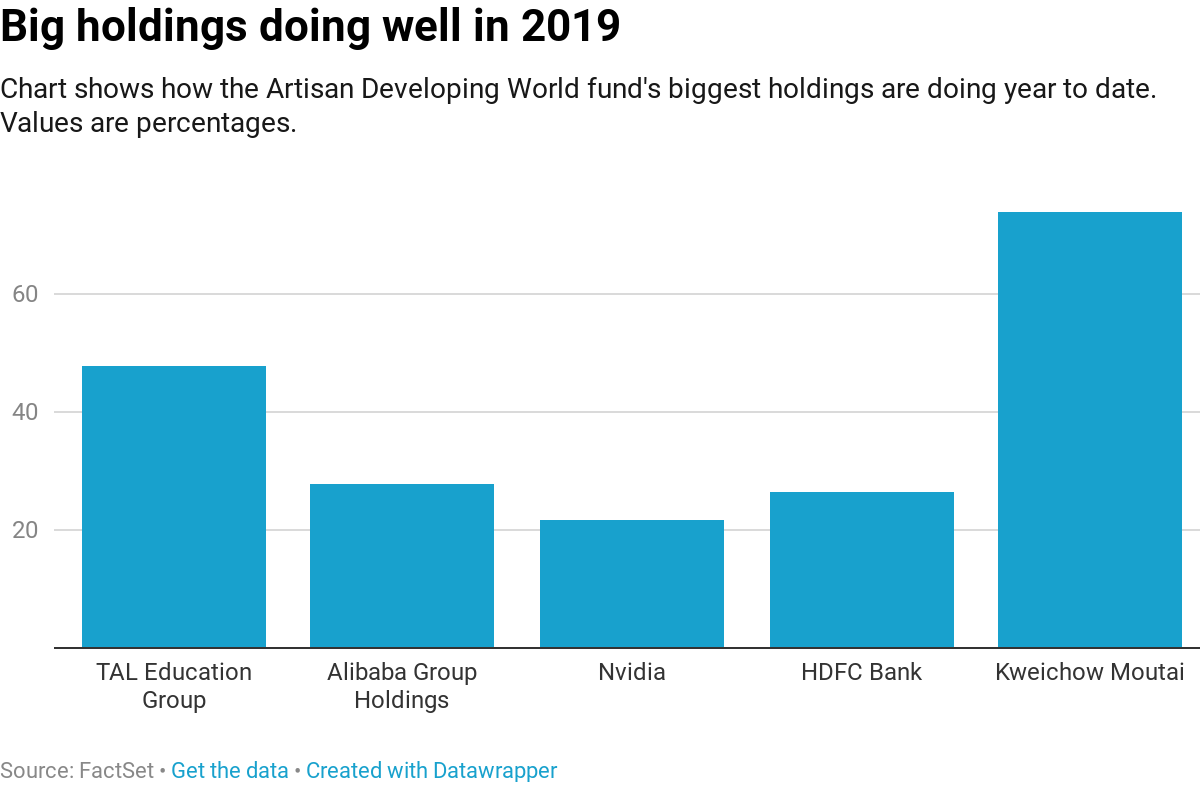 Kaufman has managed the fund since its inception in 2015. He said he uses the same approach he used when managing another fund at Thornburg Asset Management, which “embeds the importance of compounding,” or finding companies with the potential to steadily grow their business over time and benefit from strong domestic demand.

“With this approach, Kaufman has led this fund to superior results over both the past year and his full tenure,” said William Samuel Rocco, an analyst at Morningstar, in an April note. “This fund is a good choice for investors who seek a long-term emerging-markets offering and who understand that its atypical geographic orientation and other distinctions can hurt as well as help its returns.”

Galaxy's Edge is sold out of some lightsabers and droid parts, but there's still plenty to buy