The Army is sending highly specialized teams of doctors, nurses, medics and psychologists to the New York City area to help relieve the burden on COVID-19 medical efforts — by bringing makeshift treatment facilities, testing patients, monitoring symptoms for the virus and in some cases treating those infected.

“They are being sent to the point of need,” an Army official told Warrior about the deployment.

Four of the eight teams are being sent to NYC, three to New Jersey and one to Connecticut, according to an Army statement. 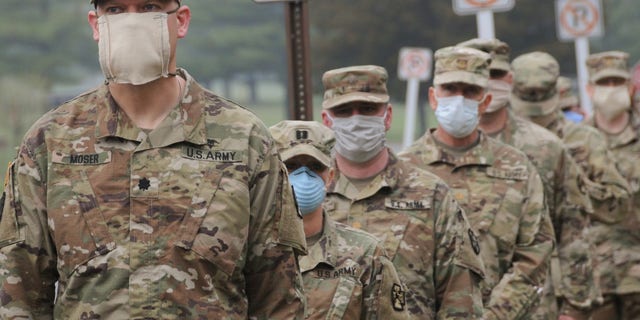 “What it does if you go from the screening to the recovery point and the healthcare continuum, it helps create an arm’s reach in the screening … instead of overrunning an emergency room with hundreds of people, which then presents the challenge for healthcare professionals to not getting sick,” McCarthy said. “So by going to the (mobile test site) you can have many of these people get diagnosed, they get prescriptions and they go home as opposed to overwhelming emergency rooms.”

Along with physicians, nurses and medics, the Task Forces have nurses, physicians assistants, dentists, pharmacists and psychologists. Each unit has the capacity of a 250-bed hospital and will be largely focused on screening, testing and performing what the Army report calls “low-acuity” care.

The medical teams, which will also treat non-COVID 19 afflicted patients, are trained to properly safeguard both patients and medical personnel involved in the effort, given the pace and complexity with which the disease is transmitted. These methods are likely to include Personal Protective Equipment such as face masks and respirators, as well as decided “distancing” measures put in place for small treatment communities.

Several essays from the National Institute of Health report that the virus is transmitted orally or through tiny “droplets,” adding that current evidence shows an incubation period of two to 14 days can complicate screening efforts, as many infected people may not manifest symptoms. Also, unlike previous viruses responsible for large-scale infections, COVID 19 travels immediately from human-to-human transmission, after beginning in animal-to-human infection.

Specifically, an NIH paper, called “Epidemiological and Clinical Aspects of COVID 19,” says evidence shows the virus emerged from animal to human contact in Wuhan, China. The April 1 essay states “For COVID-19, as suggested by epidemiological evidence in China, this outbreak began from a seafood and live animal shopping center in Wuhan, Hubei Province on Dec.12, 2019.” (US National Library of Medicine, National Institutes of Health)

How To Manage Your Mental Stress