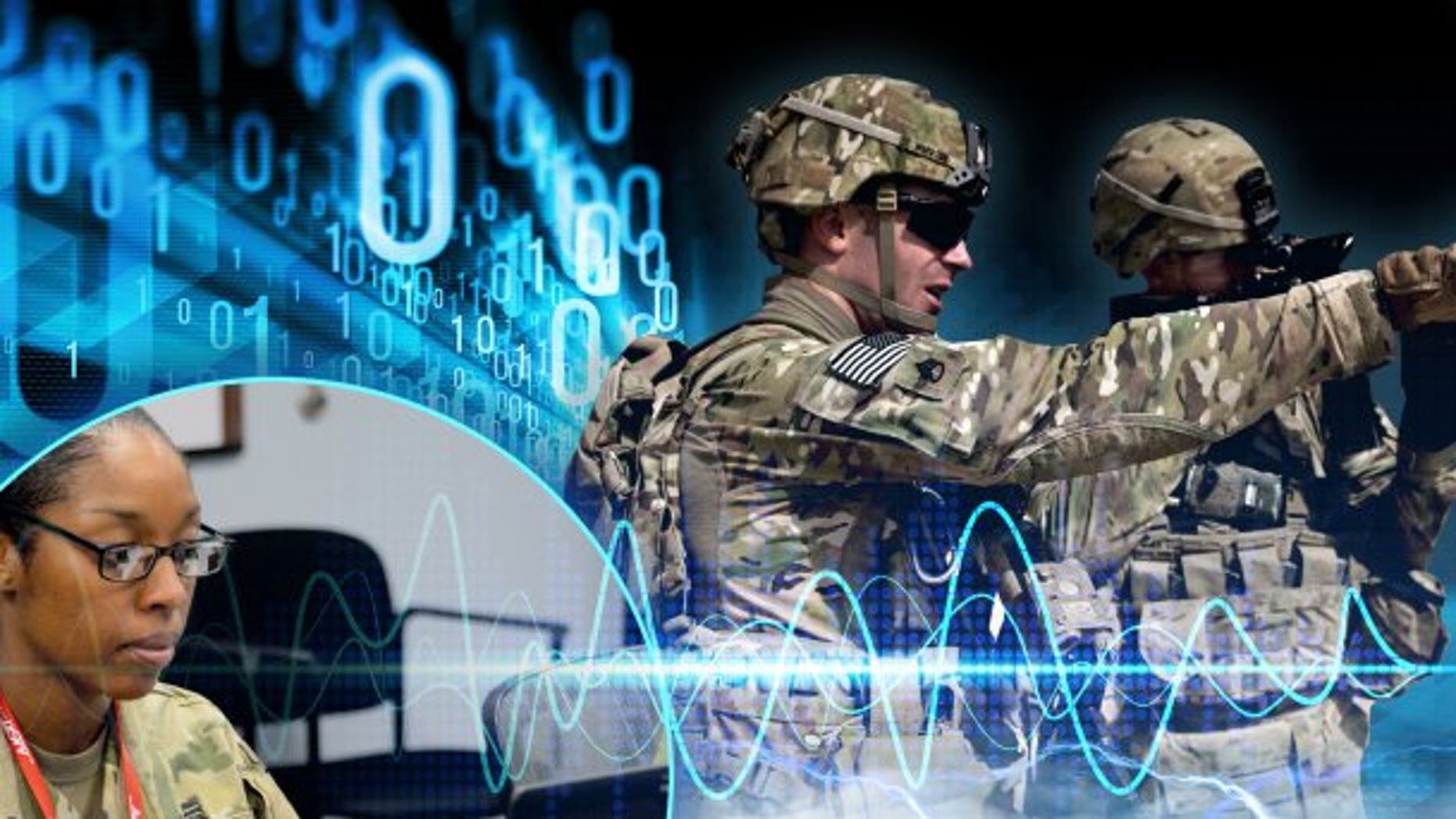 Surrounded by enemy fire, trapped in a valley between mountains and unable to use certain sensors, drones, fire-control and radar applications, a forward-positioned Army infantry unit suddenly finds itself with no radio, sensors, electronics… or GPS. Their communications are jammed, disabled and rendered useless, making them isolated and vulnerable to lethal air and ground attacks. Does this outnumbered infantry unit have any options with which to avoid destruction? How can they get air support or armored vehicle reinforcement?

This very realistic possible threat scenario, increasingly becoming more ominous with modern technical advances, is precisely why the Army is moving quickly to modernize its arsenal of electronic weapons — and further integrate them with cyber systems. With an increasingly crowded and complex electromagnetic spectrum, contemporary electronic warfare threats are naturally extremely serious, as they can operate on a greater number of frequencies, attack with greater range and strength and fire from less detectable locations.

“The combining of EW and cyber at the tactical edge is critical to allowing Soldiers to compete in Multi-Domain Operations. Spectrum awareness and the ability to deliver EW and cyber effects will give tactical Commanders more diverse effects. We are fusing EW, spectrum and cyber together into a multi-domain toolkit for situational awareness and to make faster decisions on one common operating picture,” Maj. Gen. Peter A. Gallagher, Network Cross-Functional Team director, Army Futures Command, told Warrior in a written statement.

EW attacks used to effect by Russian military in Ukraine did not go unnoticed by the U.S. Army. During their invasion of Ukraine, Russian forces used EW in conjunction with both drones and communications systems. Therefore, the service is making a specific push to modernize EW software and hardware management — all while rapidly applying AI to reduce cognitive overload on soldiers.

One of the Army’s programs now being advanced through a deal with Raytheon is working to rapidly improve EW weapons by drawing upon increased AI and machine learning. The Raytheon effort, developed to align with Army requirements, uses analytics and advanced automation to organize, detect, emit and thwart a complex array of electronic signatures. The program, called Electronic Warfare Planning and Management Tool (EWPMT), seeks to address and advance the Army’s interest in AI-driven EW and spectrum management.

The technical improvements to the EW system are being delivered in specific upgraded software increments, Raytheon developers said. “EWPMT allows soldiers to plan and synchronize electronic warfare. It enables the spectrum manager to do what they do by looking at real-time spectrum interference based on sensor data,” Niraj Srivastava, product line manager for multi-domain battle management, Raytheon SAS, told reporters.

EWPMT allows soldiers to visually “syngergize its EW attack, targeting and surveillance capabilities,” according to an Army report. The concept, being brought to fruition by advanced software, is to fuse and integrate otherwise disparate pools of sensor data, frequency information, targeting intelligence and EW signatures into a single, integrated picture.

The 4th increment or “drop” of the technology is designed to manage multiple frequencies, attack signatures and electronic surveillance nodes – organizing them for a human operator. It helps them respond with a playbook for specific threats and complex sets of actions, Raytheon developers say.

“There can be up to 100 different things for an Electronic Warfare Operator (EWO) to manually type in — which can now be automated,” Srivastava said. “It helps you determine what to jam and what not to jam and connect with sensors on a network.”

In effect, advanced machine learning and automation can massively expedite what is called Spectrum Frequency Allocation Formats, or technologies intended to discern necessary EW threats. As a software system, Srivastava explained, EWPMT can accommodate a wide range of sensors with factors to include soldiers’ backpacks and vehicles; it can also be adopted and customized for Navy and Air Force systems as well.

Given that there is an increasingly crowded and of course “finite” amount of spectrum, Army weapons developers have had long-standing concerns about EW threats. Interestingly, a 2006 essay from The Department of the Army seems to foreshadow, if not predict, emerging contemporary EW defense challenges. “The spectrum is a resource, and while non-expendable, it is finite.

A limited number of channels, or frequencies, can be accommodated at any given time in a given area. While it is true that emerging systems are more efficient users of bandwidth they also use more bandwidth to pass larger amounts of data which leads to frequency congestion because never before have so many emitters been present in an area of operations,” the essay, titled “Army Electromagnetic Spectrum Management Operations, states.

Given this scenario, it is naturally incumbent upon EWOs to identify and distinguish various emitters and frequencies, with a specific mind to “de-conflicting them.” These tasks provide some of the tactical basis upon which EWPMT is based; advanced software can collect a range of sensor data, look for patterns and frequencies and then instantly compare it against a seemingly limitless existing database to discern and organize threat signals for soldiers performing command and control. Significantly, although the essay was written in the earlier days of EW technical maturation, it does seem to properly anticipate a fast-growing range of potentially vulnerable systems; in recent years, the number of electronically-dependent systems and sensors have increased in an exponential way.

Spectrum managers, therefore, the essay states, must be prepared to defend and enable both communications and non-communications systems. “This includes radars, sensors, and robots to name a few. This must also encompass all dimensions of the battlespace including airborne platforms such as surrogate satellites, unmanned aerial systems (UASs), space platforms and subterranean systems,” the essay states. Gallagher’s points of emphasis, quite significantly, could be seen as a modern iteration or byproduct of the specific kinds of spectrum de-confliction challenges envisioned in the 2006 essay.

At the same time, the current network modernization effort, which includes EW, operates in a much different and far more complex technical environment. Therefore, while similar in concept, the 2006 essay was written at a time when the current extent of AI-informed software upgrades may not have been fully envisioned. Current AI-directed EW software upgrades, such as those being pursued by the Army and Raytheon, massively shorten EW sensor-to-shooter time and organize otherwise separate pools of data, something which determines survival in war. “The Network Cross Functional team is closing capability gaps in the area of electromagnetic spectrum de-confliction to enable fielded systems to operate as intended in their operational environment,” Gallagher explained.

The U.S. Army’s recent experience in Iraq offers a pertinent window through which to explain the rapid maturation of EW attack technology. In the earlier years of Army counterinsurgency in Iraq, EW sensors were primarily seeking specific, detectable or less complex electronic detonation signals used by enemies to explode IEDs. These included things like garage door openers. However, Iraqi insurgents rapidly migrated to more advanced kinds of electronic triggering to include cell phone detonation and other electronic attack methods. The evolution of these threats forced the Army to quickly adapt and engineer new EW detection and attack systems. For instance, the threat scenario in Iraq led to development and upgrades of several EW IED detection systems such as the vehicle-mounted DUKE and soldier-mobile THOR III. The DUKE, which consisted of a sensor and antenna on top of armored vehicles such as MRAPs, was upgraded through a program called “technical insertion” wherein it received software and hardware upgrades engineered to detect more advanced signals.

Current EW upgrades, such as EWPMT, seek to take this to a new breakthrough level of speed, detection, command and control and attack — through the use of advanced software and AI. This dynamic regarding evolving threats, as the Army essay seems to predict, is extremely prevalent in today’s modern threat environment. Drone controls, video feeds, sensor information and even soldier-worn technologies are potentially vulnerable to electronic attack. The fast emergence of new threats, as identified by the essay, provides the inspiration for why Raytheon developers are building EWPMT with a specific technical architecture such that it can accommodate new upgrades and third-party integration- such as “software drops.” “We want to evolve as the threat evolves,” Srivastava said.

In an apparent effort to align with the Army’s rapid integration between cyber and EW domains, Raytheon has funded a Cyber and Electromagnetic Battle Management program to bring more AI-cyber integration to EW management. This is quite significant as sensors, targeting technology, navigational systems and radios all not only rely upon the electromagnetic spectrum but also, ultimately, generate data. This data, by extension, can inform the AI-algorithms fundamental to EW operations. Even further, the existence of software-programmable radio further fortifies this cyber-EW synergy as it sends packets of IP protocol through high-bandwidth waveforms. These kinds of networks, while at times restricted to line-of-sight connectivity, use individual hand-held systems as both radio transmitters and “nodes” or “routers” themselves able to enable successful networking.

These circumstances only further underscore the importance of both hardening electronic networks and also using AI to streamline key electronic signature data for offensive EW attack. Should an AI-empowered Army sensor find what’s called a “line-of-bearing” of an enemy electronic signature amid a crowded field of signals, soldiers would be well-positioned to launch a targeted EW attack. This can be made more difficult by the use of “directional” antennas engineered to emit a signal in one, more narrowly configured direction. This tactic, explored by the Army and industry, lowers the ability for forces to be discovered. Once an electronic signal is released, it naturally creates a signature that is detectable to enemy forces. Accordingly, Raytheon’s software is designed to instantly pull data from electronic sensors to both improve EW targeting and also shorten the time of exposure during which a signal is emitted. Raytheon’s software is designed to display a unit, brigade or division’s electronic footprint as it would appear to an adversary

The Importance of Getting Advisors to Invest in Your Business