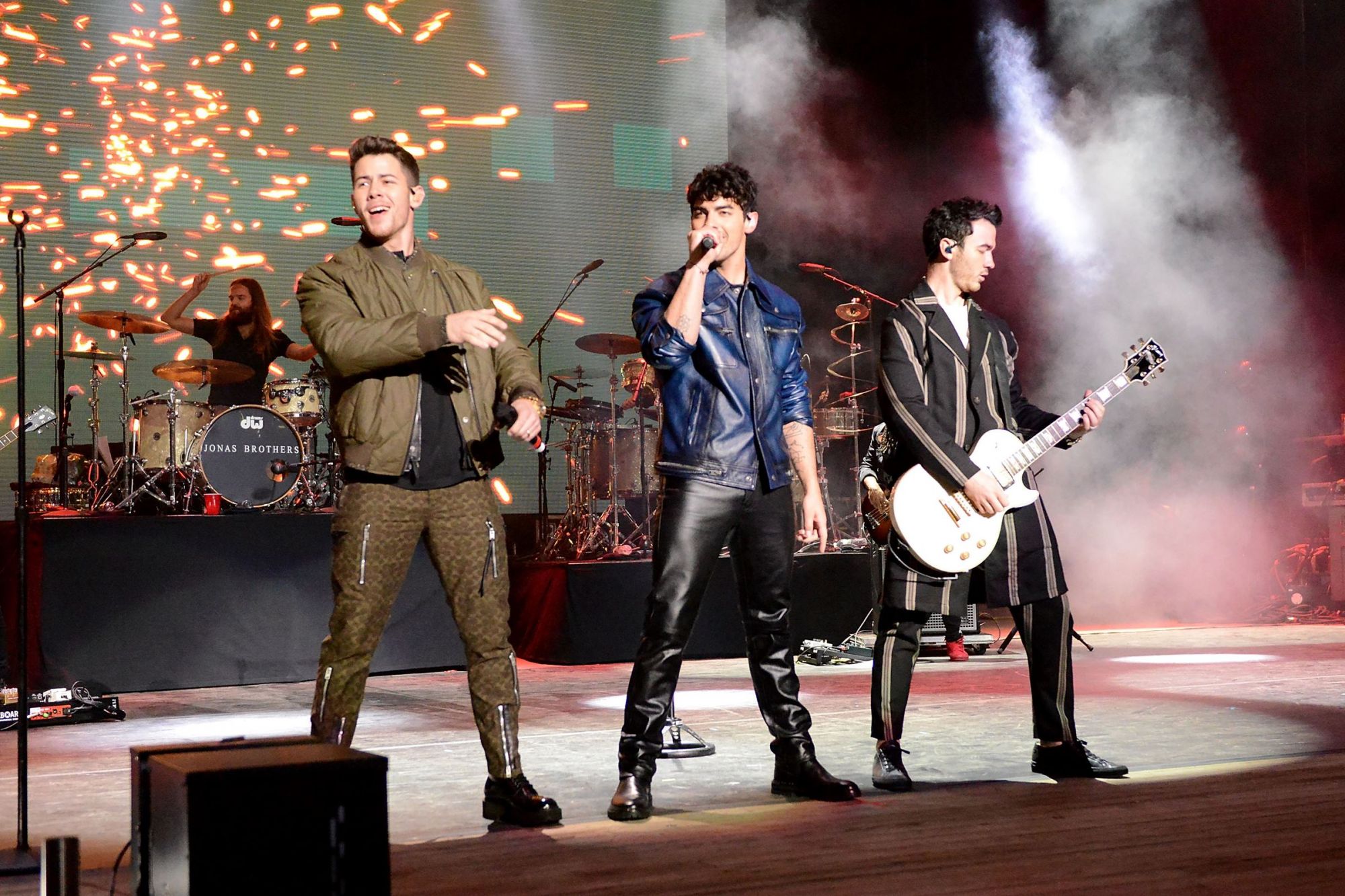 The band is back together, but only after some honest, hard conversation and a whole lot of vulnerability.

It’s a Thursday night. I’m looking for something to watch on TV after my demanding workday as CEO and founder of my own coaching business, which requires and deserves my best and most thoughtful self.

Related: A Jonas Brother’s Baby, Brought to You by Procter & Gamble

In fact, there’s nothing I love more than a break from my own high-powered mind.

So I’m clicking around, and I land on this happy, beautiful photo of three young dudes: The Jonas Brothers. I don’t know who they are, but I know that the actress who played Sansa Stark — whatever her name is — is married to one of them. That’s enough for me to click “play.” And while I’m prepared to switch to some action-romance-drama, two hours later I’m mesmerized; I’ve fallen in some kind of love with this band. I’ve cried, I’ve gaped, I’ve even demanded that my musician-husband come watch with me.

Turns out, he’s riveted too, because Amazon’s Jonas Brothers documentary, Chasing Happiness, offers some of the most satisfying entertainment we’ve ever seen.

Why? Their success story is vulnerable. It’s inspiring. It reminds us of what we’re really capable of here on planet Earth. What the Jonases have done, in fact, is epic, no matter what genre of music you like. Their story gives me clarity for my own business and for the businesses of my clients.

Specifically, the doc explores how these three brother-musicians grew up, became famous, ended their band and then did the deep and uncomfortable work needed to put the band back together. Early on, the Jonas Brothers experienced phenomenal, seemingly overnight success — and now they’re doing it again.

I watched the documentary all the way through because I wanted to understand what really happened, because I don’t believe that that kind of success or fame is magic. It might look like magic, or luck, but there’s always a deeper story.

In my own shift from New York City high school math teacher to seven-figure coach, I’ve often thought about how my success may look like magic to other people, something that happened overnight. But the truth is, building my business has been deeply challenging and has demanded my full attention for years. It continues to do so. And it has never felt like magic.

So it’s no surprise, really, to discover a similar story behind the Jonas Brothers. Here are three takeaways entrepreneurs can glean from that story, about creating true success on your own terms:

Authenticity is the key to your success.

My first and favorite theme of the doc was authenticity. Because the Jonas Bros. were authentic in their early career and continue to be now, they’ve created great music, a huge fanbase and a strong business. In the beginning, they genuinely loved making music and doing it together. They were best friends as well as brothers. Their performances always looked effortless because they were being themselves.

Related: Why Authenticity Is the Key Ingredient for Career Success

They were having fun, so it was fun to follow them.

So many entrepreneurs struggle to give themselves permission to use their authenticity in their business. Too often, they either do what they think will get them followers or hide out and avoid rejection. The truth is, our mess, our story and our humanity is what attracts people to us. Building an authentic brand isn’t magic, and if the Jonas Brothers can do it, you can do it too.

In fact, their missteps began when they started making choices to please others. They began to compromise, pretending to stay young to entertain the Disney Channel’s audience, though they themselves were growing up. They sacrificed being themselves to be a fantasy of who they used to be — and that was the beginning of the end.

The Jonas Bros. reclaimed their authenticity by making the documentary, and the album that has come out of their maturity is their most generous self-expression yet.

This isn’t something unique: The most popular and powerful personal brands (think, Oprah) make you feel as if they’re your best friend, and that translates into ad dollars, magazine subscriptions and more. Similarly, Warby Parker built its success by making its origin story — friends disrupting a sleepy industry — a key part of its identify. Warby sells a product that feels authentic and relevant to the consumer. That authenticity makes it about you, and that’s what works.

Devotion is required for the fulfillment of any big vision.

The Jonases are genuinely talented musicians and years back put in a serious effort to become masterful at a young age. Before the band, they immersed themselves in entertainment — learning instruments, performing on Broadway, filming commercials and writing songs. Once the band began, the guys put all of their time and energy into making the most of the opportunities that came to them, whether with record labels or films.

They prioritized the band more than themselves individually, renegotiating both record and film deals so that all three would be involved even when only one was invited. Their family as a whole was also so devoted to the band and its success that their clergyman-father gave up his parsonage and home, and the family’s members left their church community and uprooted themselves, with no financial backup. Every dime was invested into the brothers’ business; and the family relied on faith as its guide.

Then came the tough part, because the Jonas Brothers weren’t a magical, overnight success; they really did work hard to create their early success. As their lyrics to Rollercoaster describe, it wasn’t always a fantasy of wealth and ease:

“Those days when we were broke in California/ We were up-and-down and barely made it over /But I’d go back and ride that roller coaster.”

Success followed. But when the Jonas Bros. stopped focusing on the business, things went sideways, the band collapsed and they spent a decade recovering. Kevin was distracted by love and family. And Nick betrayed the central tenet of the band: Do everything together. His wanting to do his own thing broke up the group.

When you want a specific result, you have to do the work and commit unconditionally. You will be tested, and, if you aren’t all in, you’ll quit and the business will fail.

Chobani founder Hamdi Ulukaya was all in from start to finish, spending his first five years “living” in his factory, and choosing to remain CEO rather than sell when Dannon approached him early on. His devotion to Chobani’s growth, integrity and excellence created one of the fastest-growing, most successful startups out there.

My favorite part of the documentary was a scene where the three adult brothers play a drinking game and ask one other tough questions about what each experienced during the break-up years, then answer honestly. They go right into their shadow material: judgments about one other. Kevin was slowing the band down. Nick and Joe played a show without Kevin, after all had promised that the Jonas Brothers would only play with all three present.

Years ago, when the band was breaking up, its fun-loving, playful musicians, who shared themselves with their fans, started literally blocking the camera. Obviously avoiding hard conversations with one other, they eventually abandoned all communication with their audience — and of course things fell apart.

Honest, hard conversations are necessary to navigate change. When the Jonases hid from one other, they couldn’t tell the truth about what was changing, and so they couldn’t stay together. They also had to hide from their fans, and that was the final straw.

It’s clear that the new Jonas Brothers now share with one another. And that vulnerability and honesty shows up in the documentary, on talk shows and in music videos, with cameos from all three of their wives.

Other companies have shown vulnerability: Consider Nike’s bold move when it chose in 2018 to highlight Colin Kaepernick’s activism as part of an ad campaign. The company faced aggressive criticism from fans, who went so far as to burn their shoes, but Nike didn’t shy away from the hard conversation. It maintained its position unapologetically, and you can see the results.

Three ways in which the Jonas Brothers’ journey relates to yours

The Jonas Brothers are making a truly amazing comeback by doing the things that worked in the first place. They started communicating again, and sharing the deepest truth with their audience. They aligned with their authentic and joyful collaboration again. And the work is back —  you can witness their devotion in the music and the movie.

Related: Being Vulnerable Is the Boldest Act of Business Leadership

Living in congruence with their desires and values — then and now — became their key to renewed success. It’s not magic, but it works, and it’s a lesson you can learn from.

These are the stocks Wall Street analysts believe will lead the Dow to 28,000